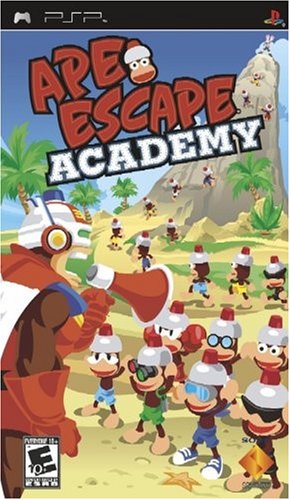 Specter has failed over and over again in his attempts at taking over the world, all because of a few bungling monkeys. To rectify his problem, he decides to form the Ape Escape Academy, where he, serving as principal, will train monkeys to follow his will. Join Specter and his friends at the Ape Escape Academy and see if you can be the best monkey you can be.

As one of the first party games available on PSP, Ape Escape Academy introduces the franchise with a whole new twist while retaining the fun and frenetic flavor of the Ape Escape franchise
Compete in more than 40 mini-games including hockey, golf, dodge ball, karate and more, with a huge variety of game styles, each overflowing with frantic fun and wacky-humor
Featuring Wi-Fi wireless LAN (Ad Hoc) connectivity, up to four players with a PSP and the game can challenge each otherUnique Tic-Tac-Toe style interface provides distinctive and unique game progression